Indian architecture studio Morphogenesis has rebuilt a school in New Delhi, using traditional methods, including walls punctuated by a pattern of square openings, to help combat the harsh climate.

The Bangalore-based office designed the building for The British School, New Delhi, to double its capacity to 1,300 students. 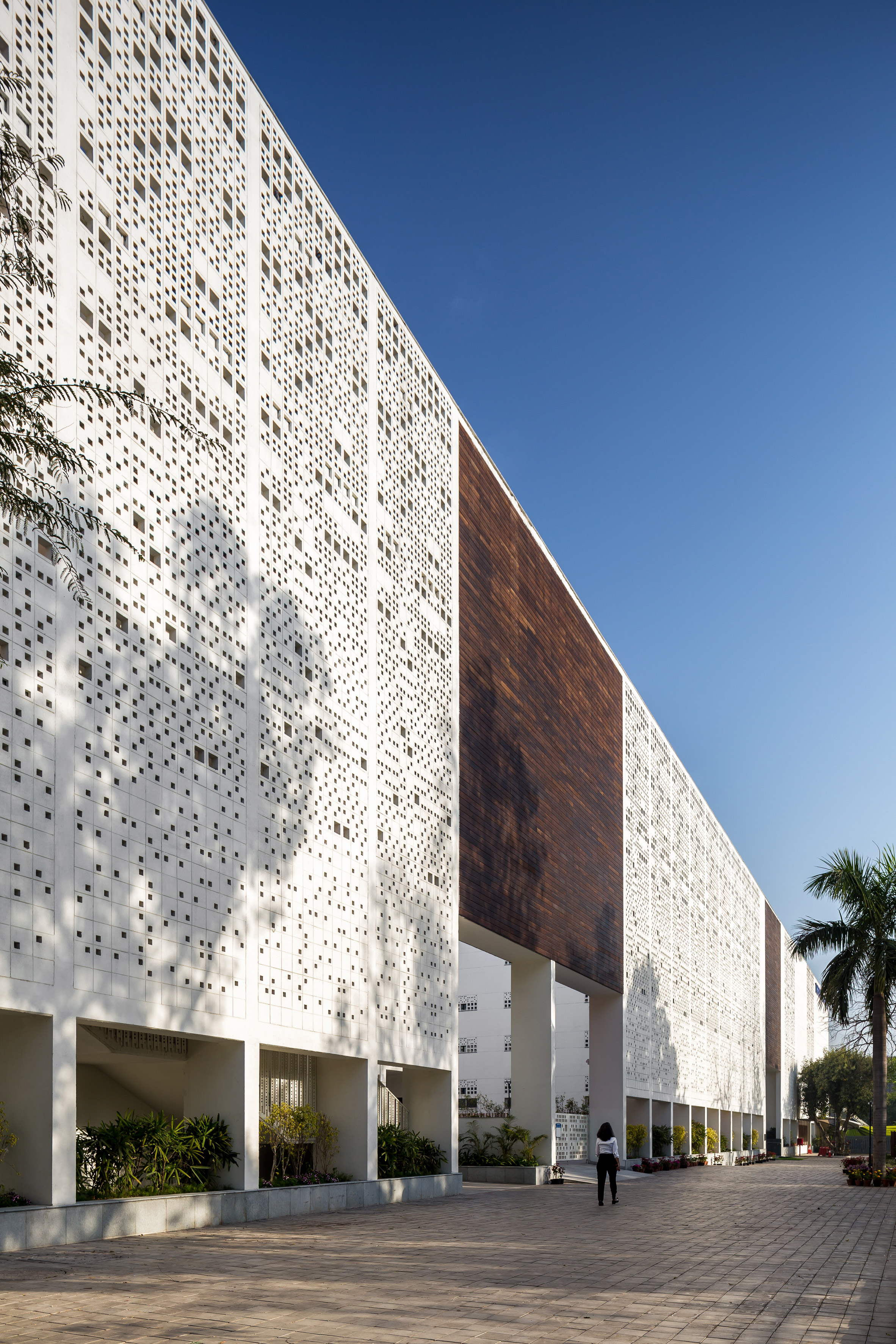 Morphogenesis based its design on the school’s remit of combining an international outlook with a distinctly Indian personality.

Local architectural devices and detailing are at the forefront of the design, which makes use of verandahs, perforated surfaces called jaalis, and internal courtyards known as chowks. 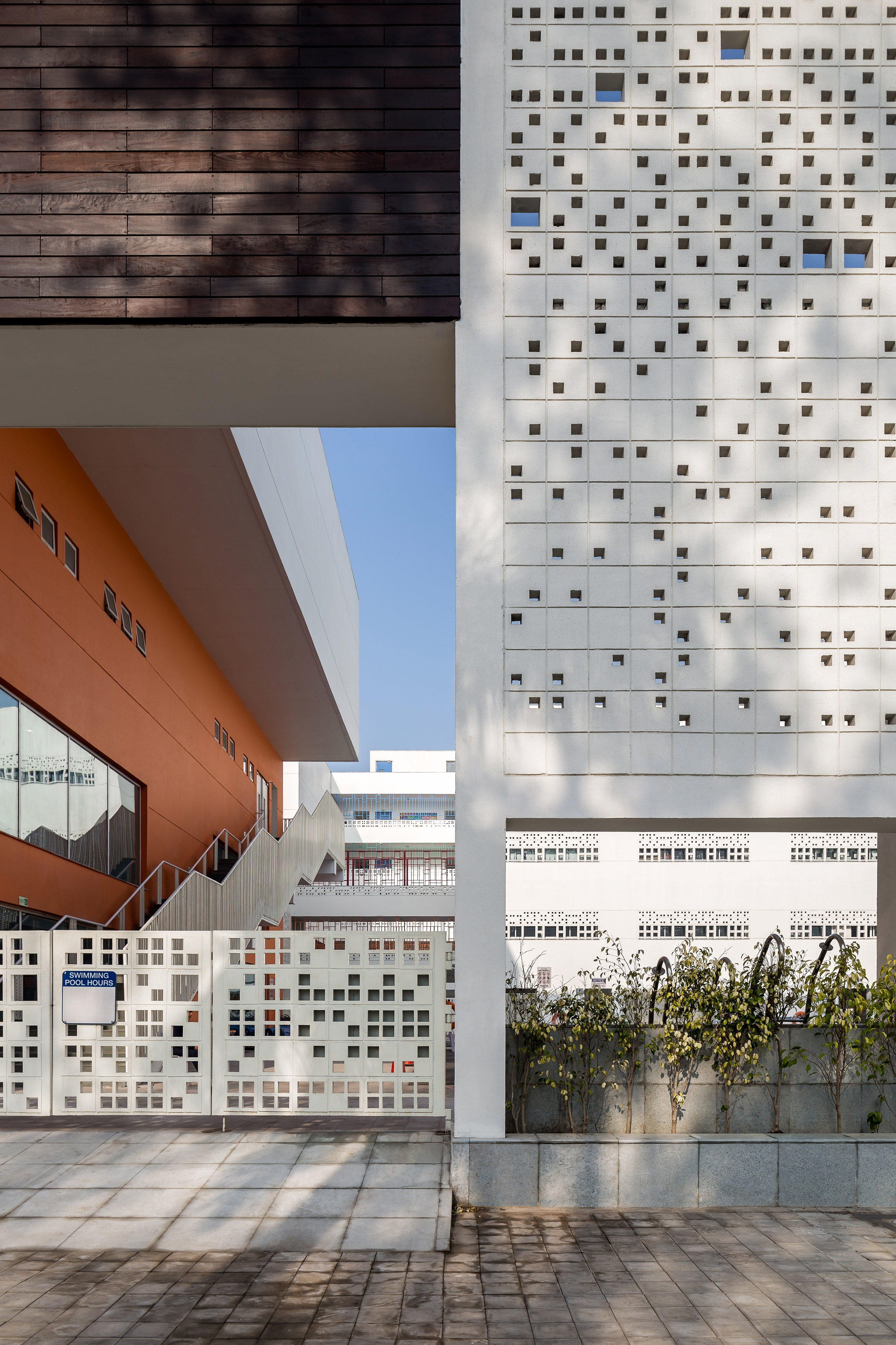 These traditional features enhance the building’s local character, while also helping to achieve a comfortable climate throughout the internal and external spaces using predominantly passive and sustainable methods.

“The architectural response – deeply rooted in the local – provides a strong cultural context, creating a learning environment that fosters social cohesion,” said Morphogenesis in a statement.

“This sensitivity to the local condition not only generates a robust and durable form, but makes the project socio-culturally sustainable, affordable, and liveable.” 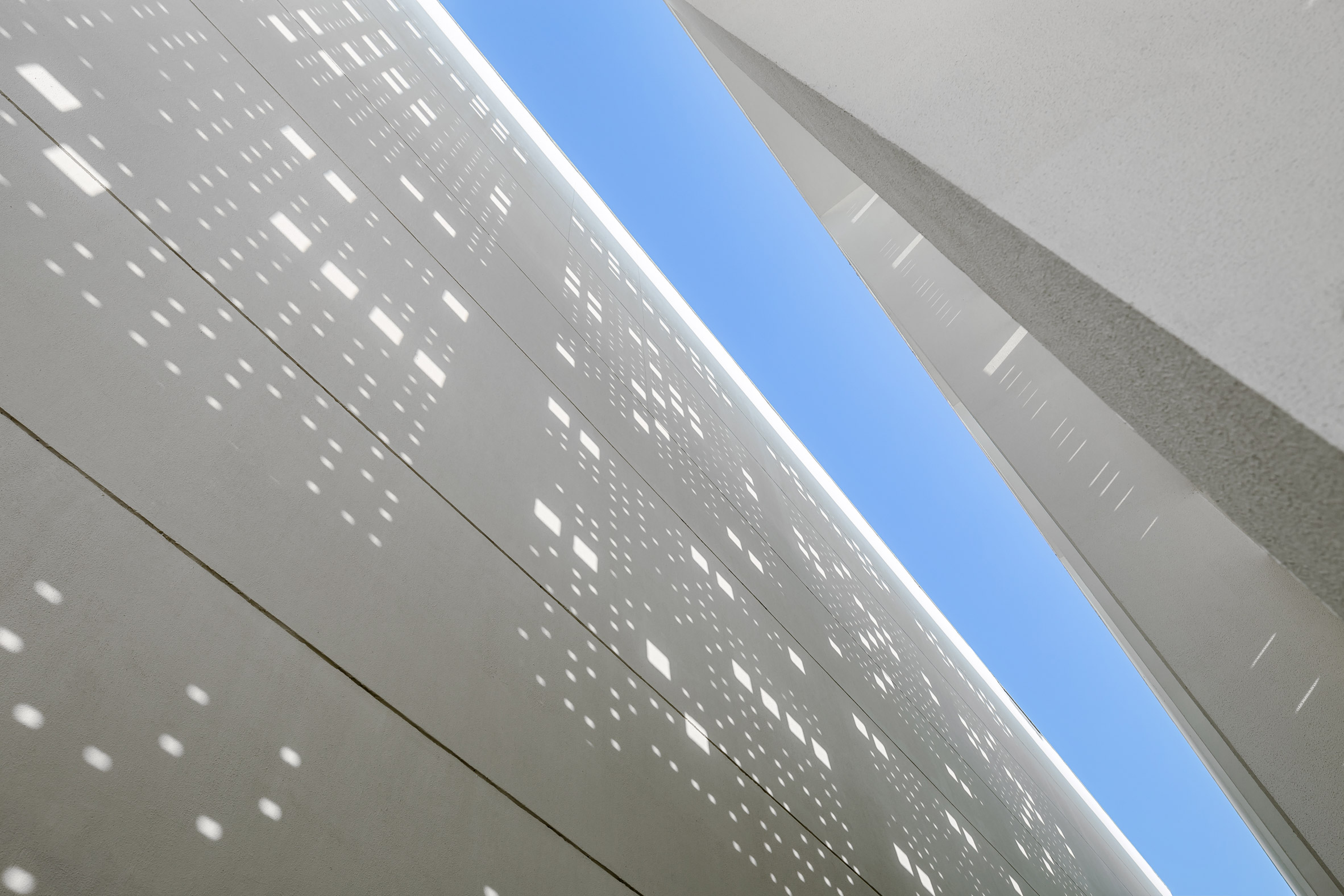 The institution’s former building was demolished in phases to minimise disruption to the school, which was constructed at the same time on the existing restricted site.

The initial phase saw a new block erected on the only available additional land along two sides of the site. This perimeter building was then used to accommodate the school’s activities as the old structures were removed. 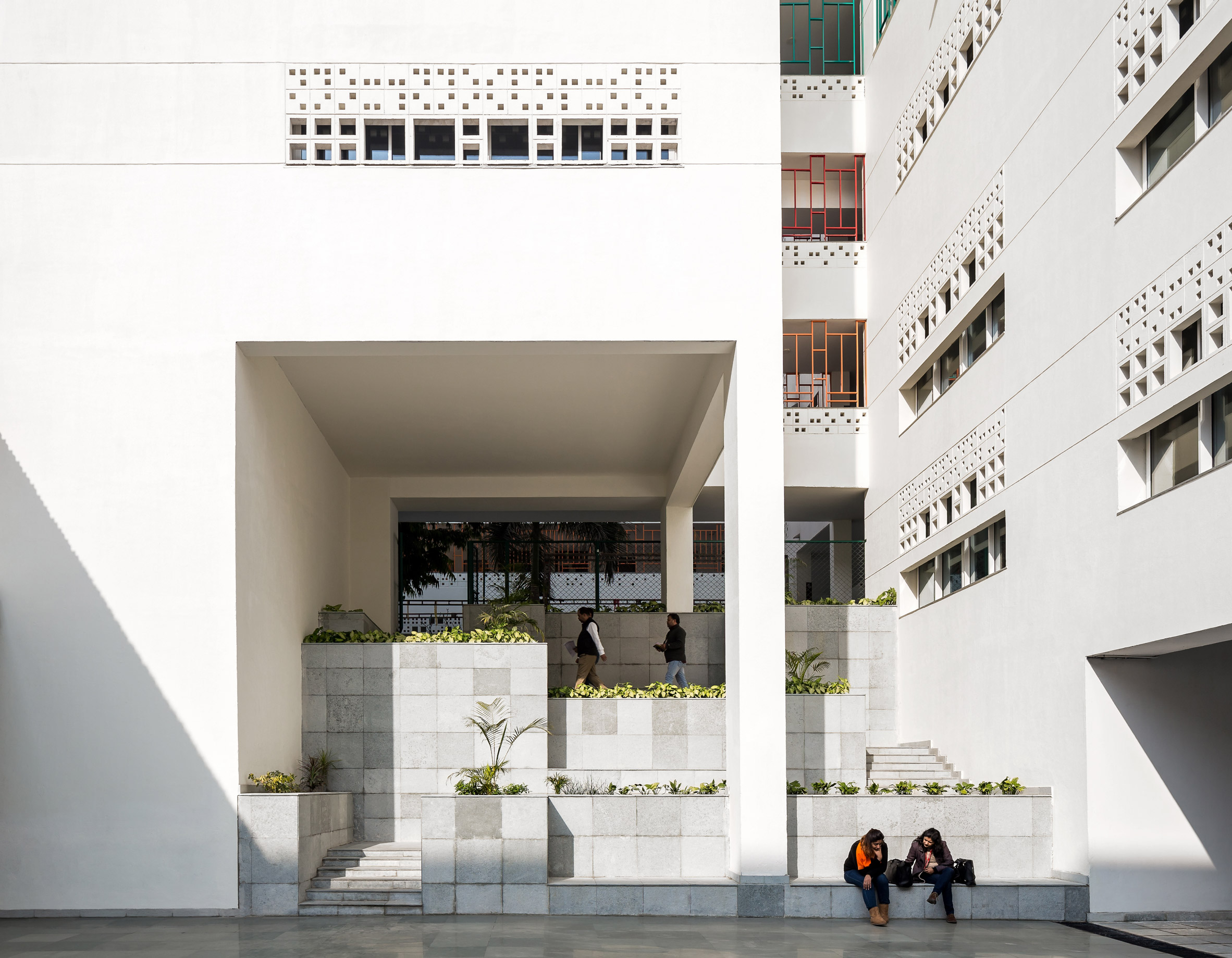 The second phase involved the construction of a cluster of flexible modular volumes on the footprint of the old school, which contain the classrooms, laboratories and other amenities including a sports hall, auditorium, cafeteria and theatre.

The various blocks are arranged around a series of courtyards, with the largest structures positioned on the south side to help to shade these outdoor spaces. 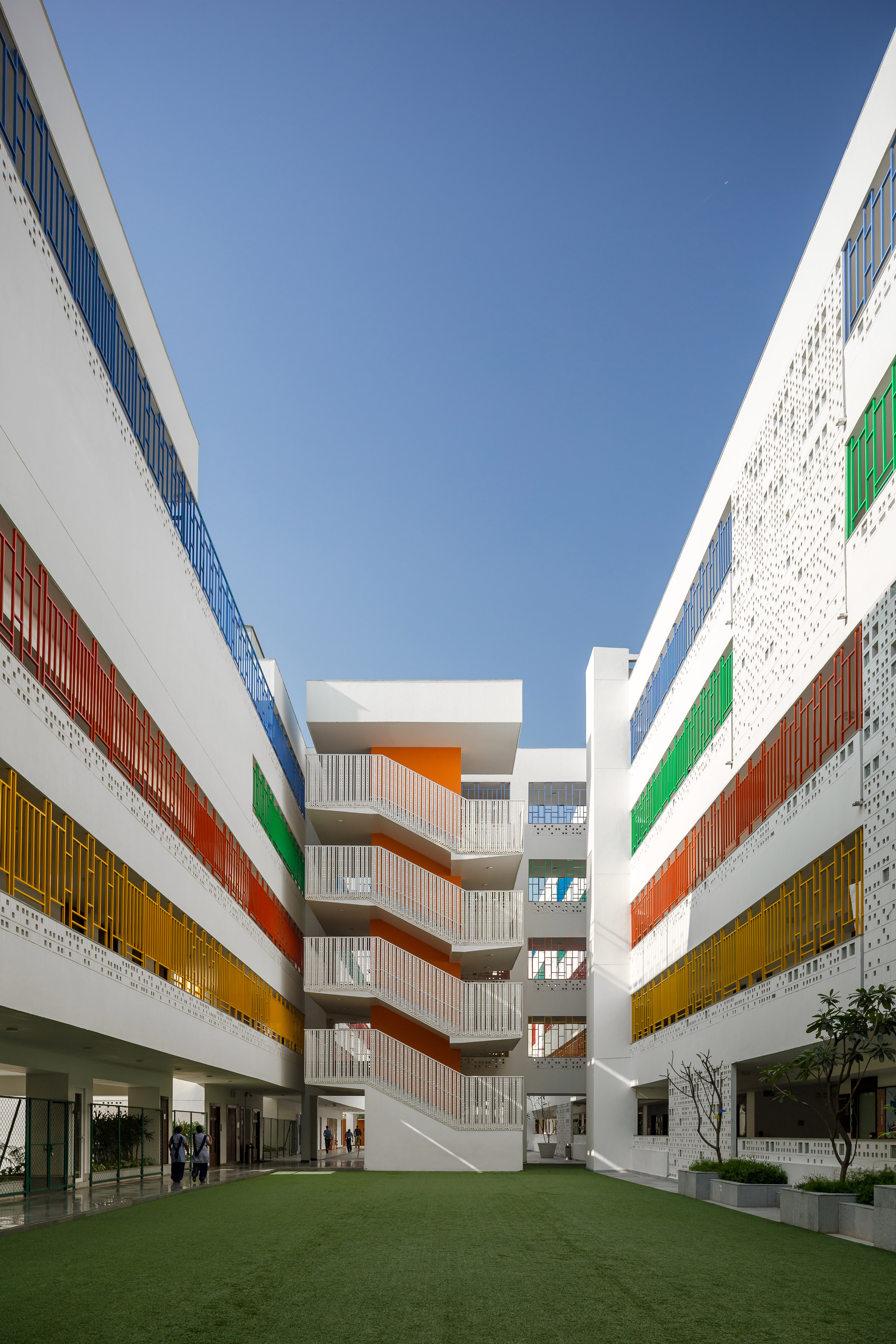 Several multipurpose breakout spaces are distributed throughout the campus’s circulation areas. These adaptable spaces provide students with locations for open-air meetings or activities and reflect the school’s social agenda.

The importance of sustainability and minimising reliance on mechanical cooling systems played a key role in defining the building’s design, which endeavours to use passive methods to control the temperature. 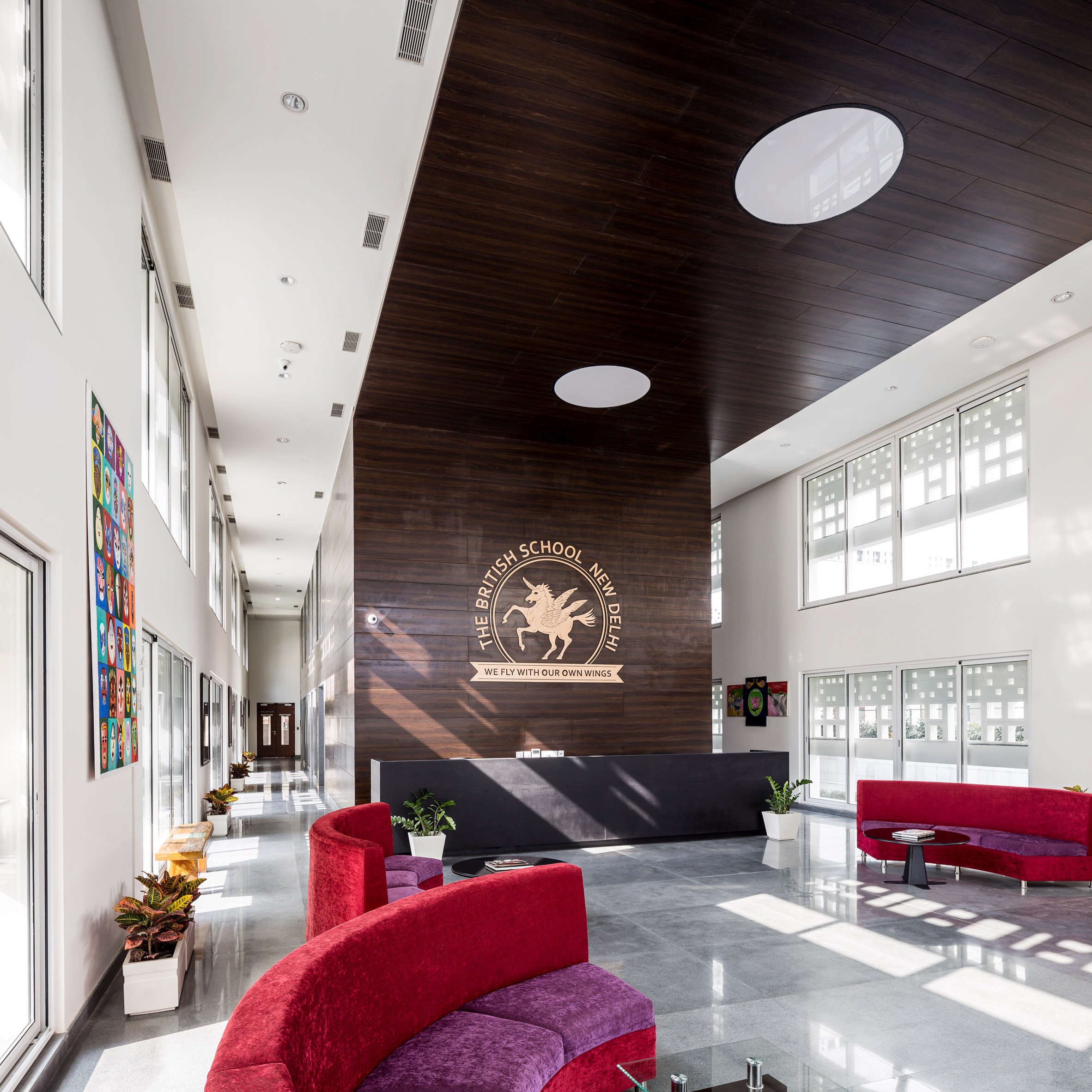 In particular, the 18-metre-high western facade displays the influence of perforated jaali walls, with square apertures of varying sizes allowing fresh air to flow through the shading surface.

Along with verandahs and deep overhanging roofs known as chajjas, the various internal courtyards provide shaded outdoor spaces for students to meet and collaborate. 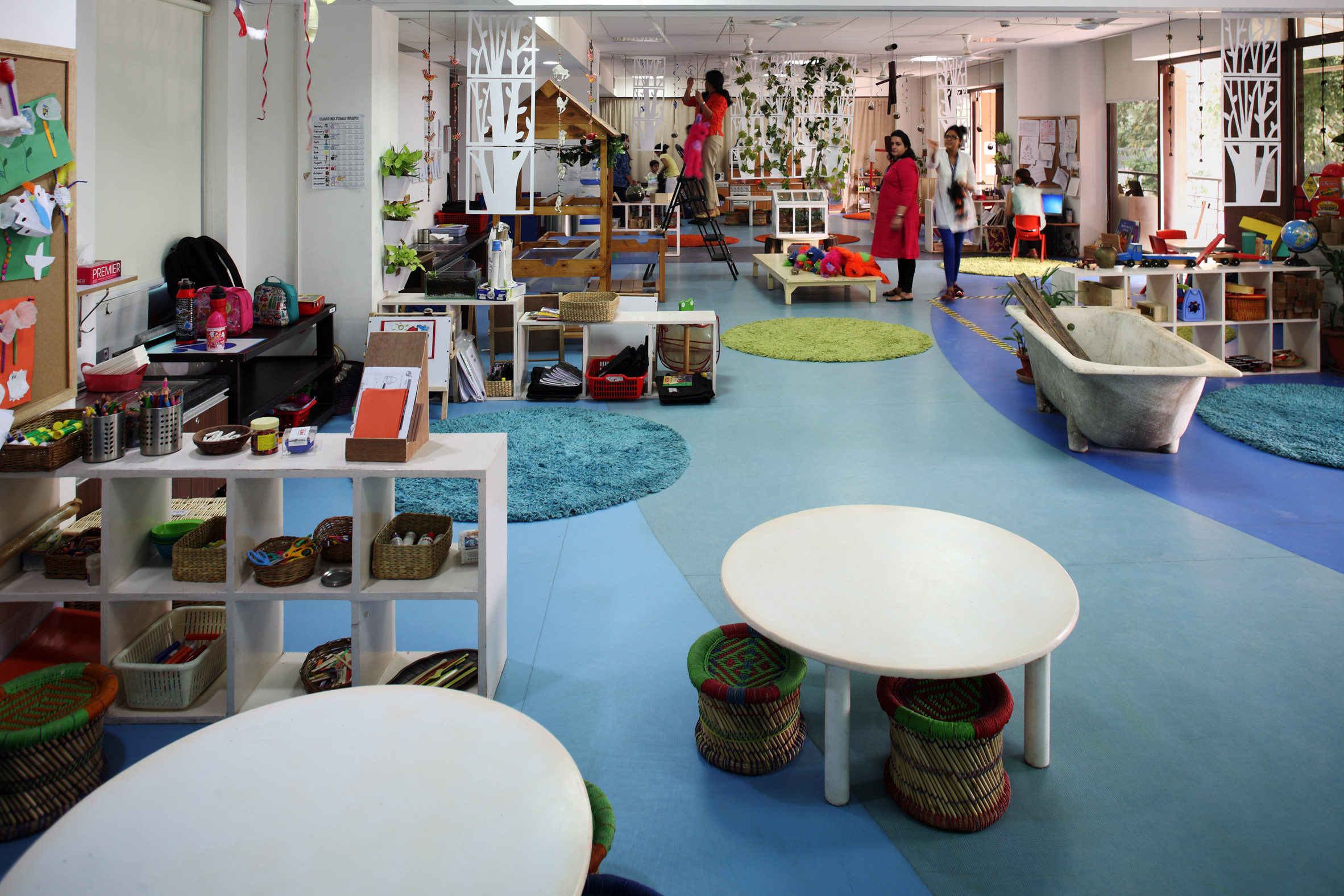 These spaces include a subterranean stepped amphitheatre-like space based on the traditional baoli, where students can seek shelter when temperatures soar to as high as 45 degrees Celsius.

Additional shade is provided by mature trees, while breezes blowing across the swimming pool produce evaporative cooling that is retained by the large adjacent wall.

Photography is by Randhir Singh.