Architect Pierpaolo Lazzarini is trying to crowdfund the creation of a self-sufficient floating city-hotel of modular pyramids.

Waya is a conceptual project from Lazzarini Design that is currently crowdfunding its first prototypes by offering investors citizenship of Wayaland – the name for the conglomeration of buoyant platforms. 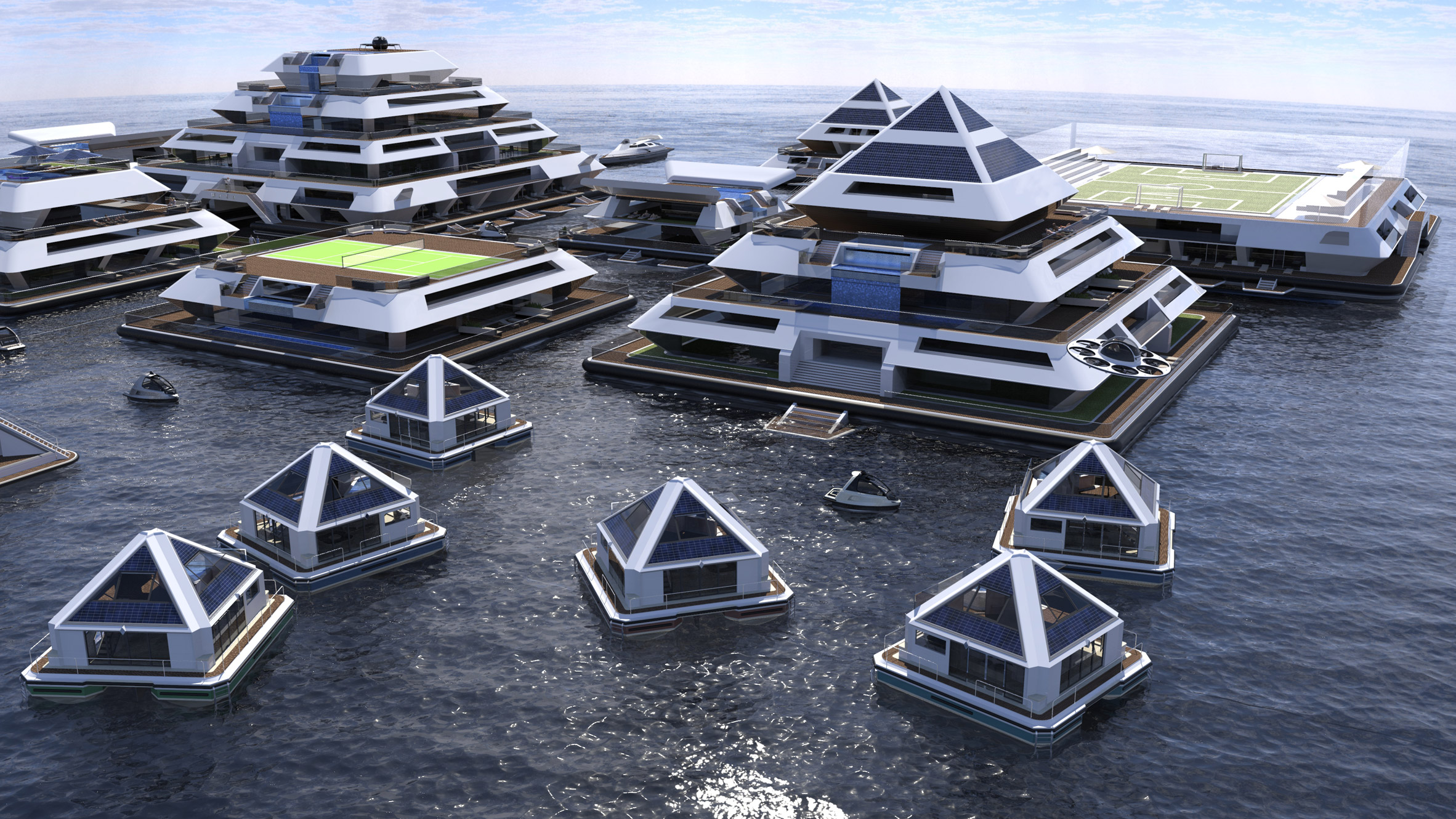 “The project was inspired by Mayan architecture, with a vision from Egyptian pyramids combined with a Japanese temple,” studio founder Lazzarini told Dezeen.

“The Waya citizens will be people that love the sea and the freedom, [who are] not more attached to cities and civilisation.” 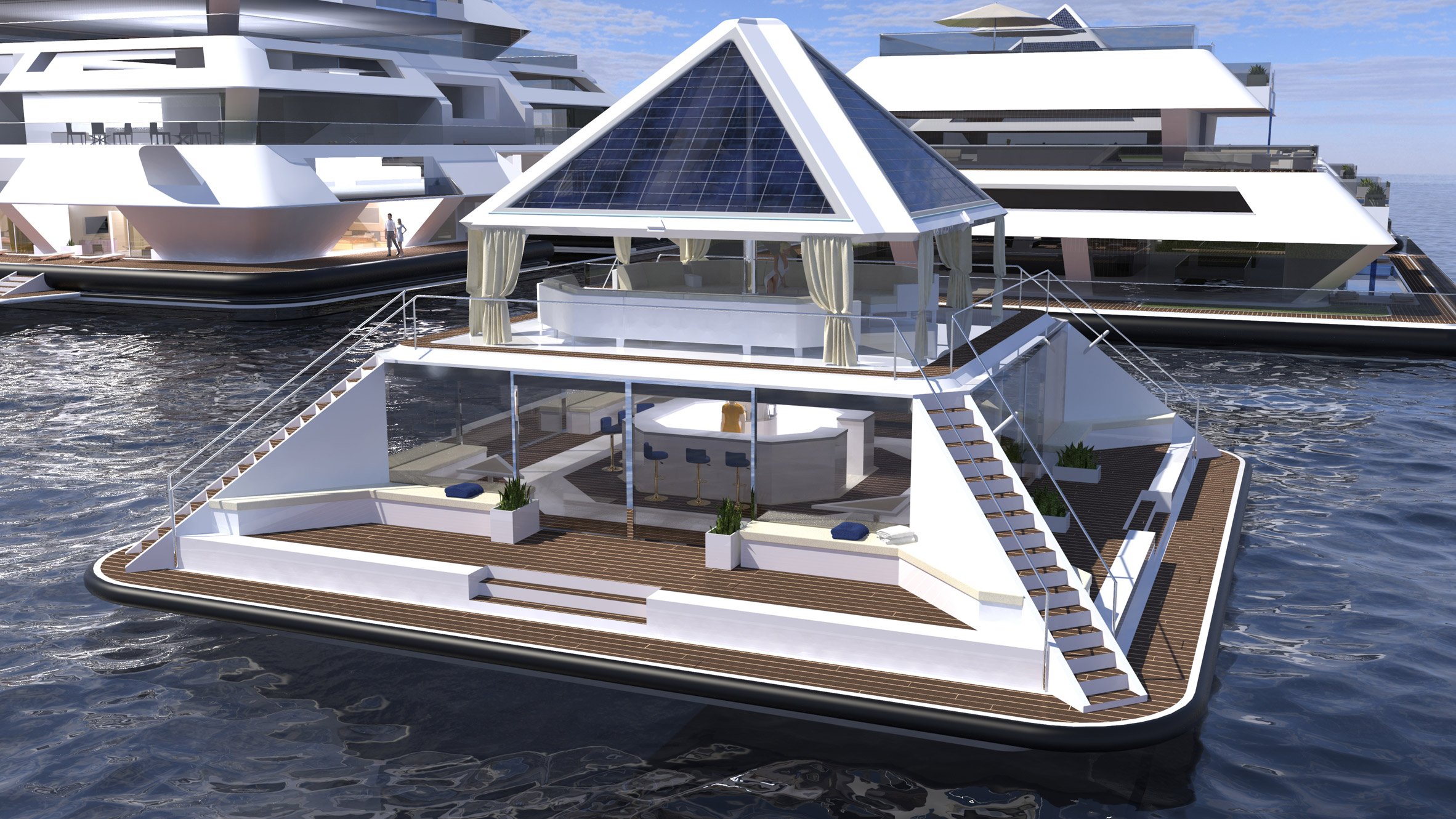 Renders show what appears to be a hybrid of ziggurat architecture and luxury yacht design.

The main pyramids would sit on 3,000-square-metre floating basement units with an entry port for boats, topped with ten floors that would extend 30 metres above the waterline.

They would have slides and waterfalls cascading down levels and bedrooms on the upper levels, with guests shown arriving by drone-copters and helicopters.

Other large pyramids contain floating sports pitches while a flotilla of smaller floating structures would contain bedroom suites and bars. Made from fibreglass, carbon and steel, each level can be added in situ once the basement has been anchored in place on the sea.

Each large pyramid would have an engine and propellors in the basement, so the platform can be manoeuvred independently into another position. 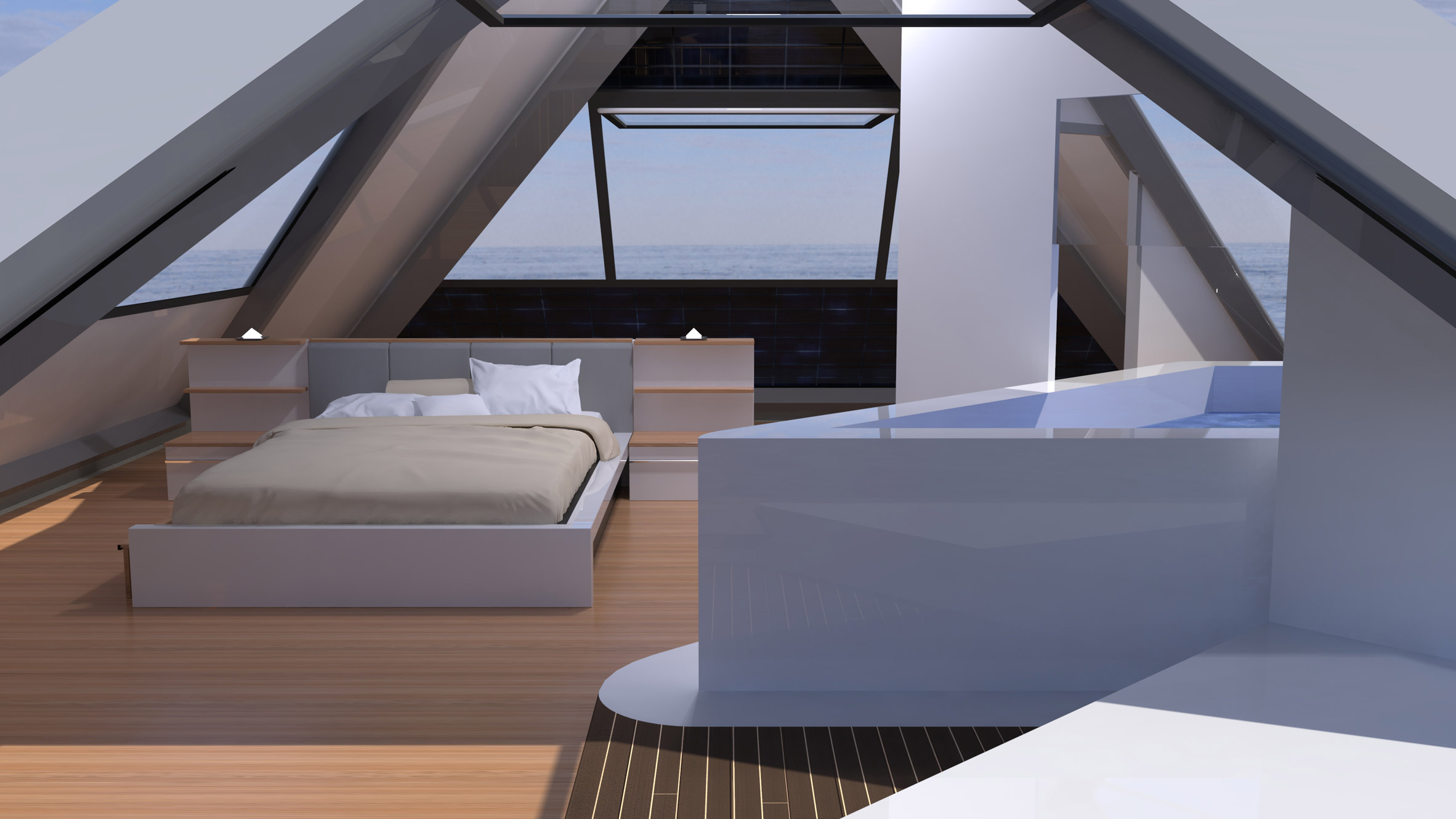 Lazzarini wants to create a “new offshore living experience” that could be entirely self-sufficient.

Solar panels and water turbines could generate power, a desalinator would be stored under the main level to provide a water supply, and floating gardens could be used to grow food. 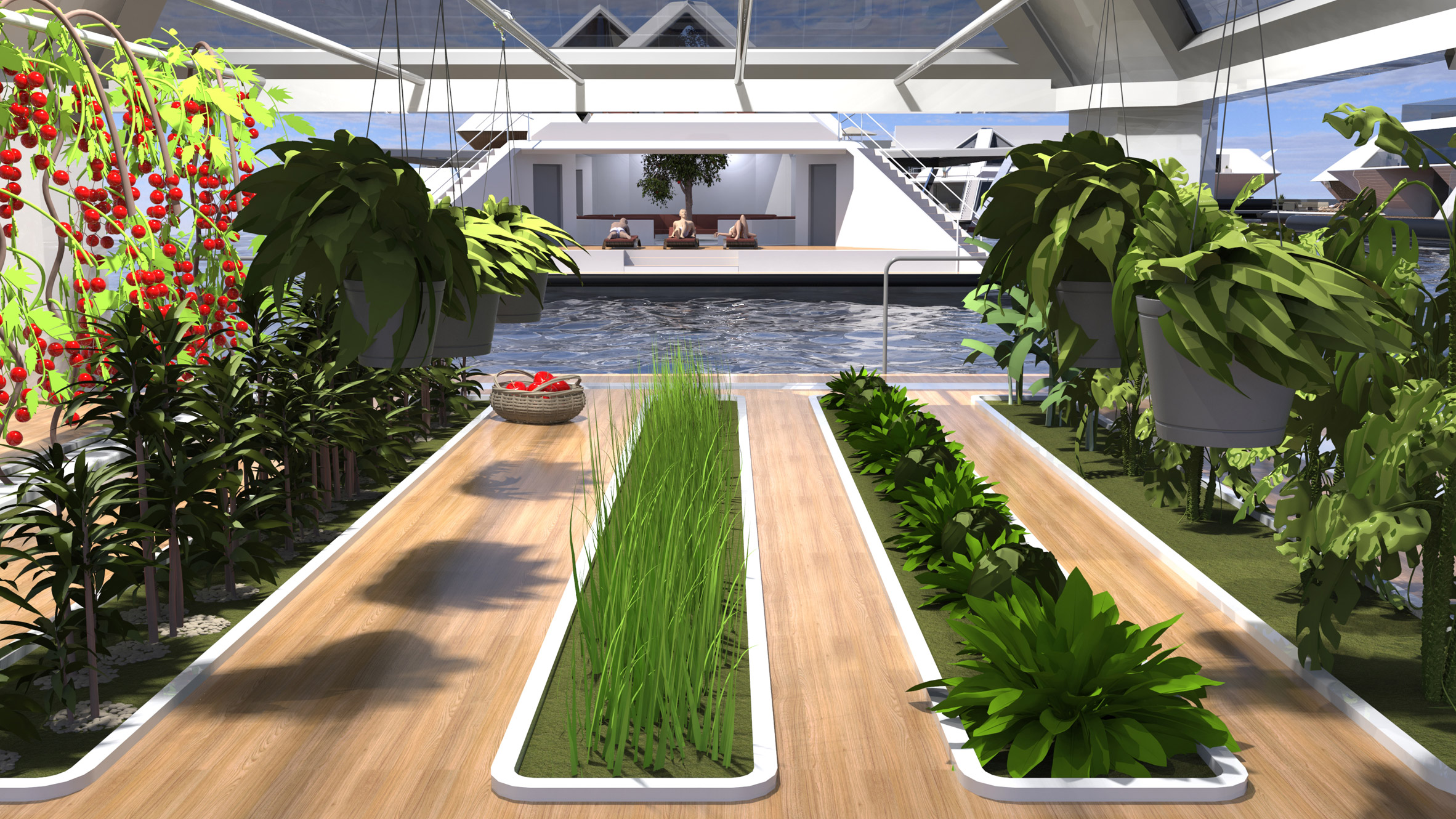 The architect estimates the cost of building the first hotel suite for Waya at £306,908. He is currently crowdfunding to build a scaled-down module of just two floors by allowing potential guests to pre-order a stay in the floating hotel room at £877 a night.

Investors in the crowdfunding project will get a passport for Waya, which serves as an invitation to the opening in 2022. They’ll also be asked to vote on where the sea-faring civilisation should call home. 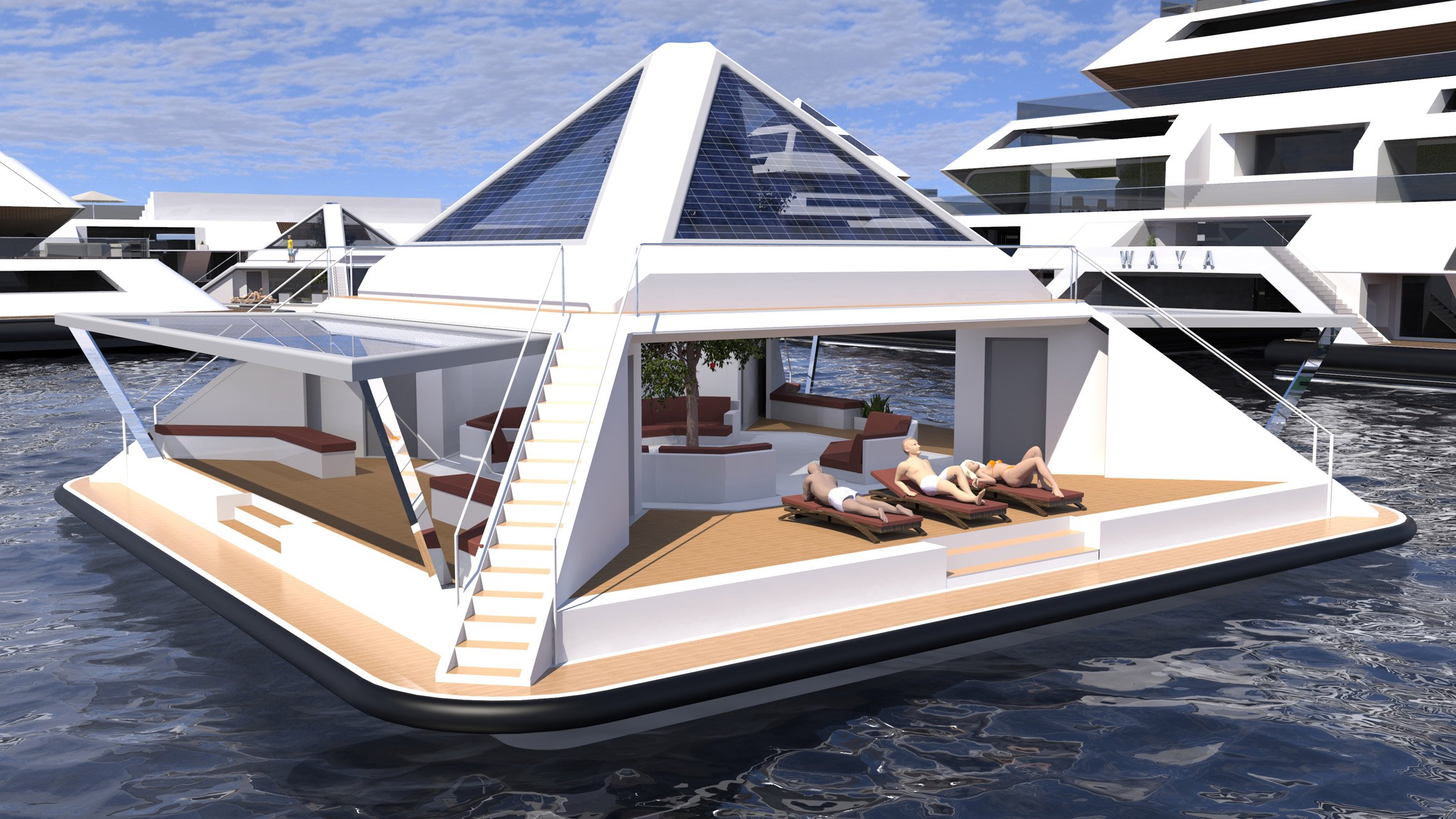 “Obviously the perfect place for Wayaland can be recognised is in UAE, let’s see what will happen” said Lazzarini.

“We’ve received lot of interest, but of course until a first module is placed it is difficult to make people believe.”

Lazzarini is not the only architect currently taking to the water. Australian architect Marshall Blecher and Magnus Maarbjerg of Danish design studio Fokstrot have just built a prototype for their project called Copenhagen Islands. Their floating wooden platform is complete with a single Linden tree and is a public space moored in the city’s harbour.

The Seasteading Institute, a non-profit co-founded by political economic theorist Patri Friedman and Paypal co-founder Peter Thiel, is currently exploring options for “start-up countries” that would be experimental societies located out to sea.

The post Lazzarini Design wants to build a city of floating pyramids appeared first on Dezeen.